Byron drew on the architecture and interior style of the many modernist buildings that dominate the landscape in the desert city to create Victory – a fictional, utopian 1950s-style society where the film takes place.

“We wanted to build a playful and debaucherous take on the 1950s, when there was this illustrious progressive, mid-century modern movement happening,” Byron told Dezeen.

Directed by actor and director Olivia Wilde, Don’t Worry Darling follows fiery couple Alice and Jack – played by British actor Florence Pugh and musician and actor Harry Styles – as they go from living in an idealistic paradise to a troubled world fraught with secrets, control and manipulation.

The characters move across a quintessential Palm Springs backdrop of low-slung buildings with clean lines by architects including Richard Neutra, Harold Bissner Junior and Albert Frey.

Several scenes, such as a cocktail party hosted by the leader of Victory which took place in Neutra’s Kaufmann House, were shot in real modernist buildings, while the home of protagonists Alice and Jack was built in a Los Angeles studio.

“We’re really lucky in California to have access to this architecture and in my history of being an architecture student and a production designer, I’ve gotten to visit a lot of these houses in person,” Byron said.

“I was interested in Neutra, but also Frey was a huge inspiration for us because of that playful wholesomeness that he embodied,” she said.

Byron, who studied architecture at University of California, Berkeley, threaded more subtle modernist details into the interiors of Don’t Worry Darling through devices such as colour.

“A colour we used quite a bit was Frey’s favourite colour – this Frey blue – which is like a robin’s-egg blue that he puts in all of his buildings,” explained Byron.

“There’s also a colour that Kaufman House has quite a bit of; Neutra put this really, really, really dark brown that almost feels black, but it has this warmth to it,” she continued. “We weaved that throughout the film as well.”

Much of the furniture seen was built from scratch, in part because the film was shot during the autumn of 2020 when many vendors were unavailable or had long lead times as a result of the coronavirus pandemic. 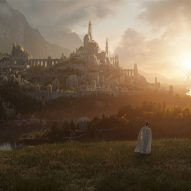 “When you’re in Palm Springs, they just have these antique stores and even in thrift stores and Facebook marketplace you can find really special things,” the designer recalled.

“That’s also one of the most amazing things about Los Angeles – there are infinite prop houses here so we shopped quite a bit at all the local prop houses,” she continued.

“The television in Alice and Jack’s house is from this vendor called RC Vintage, which is just like a treasure trove place of antique electronics.”

Meanwhile, the designer paid homage to Neutra’s storage cabinets, which the production team filled with items such as business cards, cleaning supplies and photographs of Alice and Jack to make the set feel more real for the actors.

“Keeping with Neutra as our design inspiration, the house is designed with a lot of storage in mind – we wanted all of this stuff to be cleanly kept behind doors,” Byron said.

Byron hoped that by incorporating playful elements throughout the set she could “subvert” the sense of normalcy in Victory and play with the audience’s expectations of a thriller.

“The thriller follows a formula often, and I thought it could be really great to just subvert that,” she said. 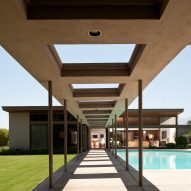 Eleven buildings that prove Palm Springs is a modernist oasis

“I think the level of play helps viewers feel like they want to be there and if it wasn’t for the playful aesthetic, I think we would be expecting something to go wrong,” she added.

Don’t Worry Darling is not the only film that draws on a key architectural movement to inform its set. Wes Anderson’s Isle of Dogs film sets were heavily informed by metabolist architecture, while Black Panther’s “voluptuous” sets recalled works by architect Zaha Hadid.

The photography is courtesy of Warner Bros.

Ten living spaces that don't relegate tiles to the bathroom

What to Look For – Dogster