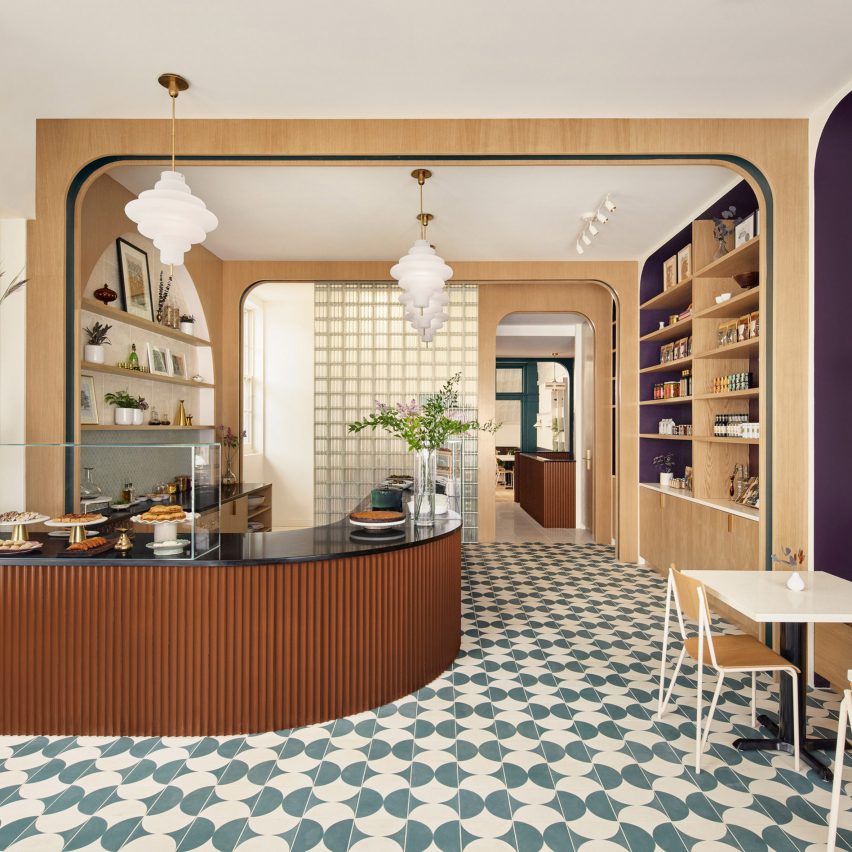 Architecture and interior design studio Frederick Tang Architecture has transformed a 19th-century building into a Lebanese restaurant in Brooklyn with “an abundance of textures”.

Named Nabila’s, the restaurant opened in May 2022 and was designed in collaboration with restaurant co-owner Mike Farah. The renovation transformed a formerly dark, segmented space into a restaurant that aims to reflect the heritage of its owners – a mother and her son.

“The client wanted to create an authentic food experience, one that reflected his Lebanese background and that evoked the spirit of his mother’s dinner parties.” Frederick Tang Architecture (FTA) director of interior design and branding Barbara Reyes told Dezeen.

“The result is an abundance of textures, patterns, lush colours, and hints of Middle Eastern moments while celebrating his mother’s home cooking.”

Nabila’s takes up the ground floor of an 1886 Queen Anne corner building in Cobble Hill, a Brooklyn neighbourhood where restaurant co-owner Farah grew up.

Through the use of rich materials and colour palettes, the studio sought to nod to the Lebanese roots of the owners whilst embracing aspects of the existing building that would work with the new design.

“Our favourite projects are ones with some historic contexts when we can create something that’s both old and new,” said FTA director of design Frederick Tang. “We loved playing with some original details and inventing new ones that work with them.”

“Before we started the project, the space was occupied by a popular gastropub style restaurant,” Tang told Dezeen.

“It was a neighbourhood staple, so the client felt pressure to maintain some history while being true to the roots of this project,” Reyes added.

“The interior was more like a moody library with lots of dark wood and it had a lot of character but we knew we wanted to make it feel much lighter,” Tang continued.

The upper floors of the Cobble Hill building are made from brick, whilst the ground floor is clad in timber with ornamental mouldings. The facade has now been painted black, with curved forest green awnings referencing the interior. 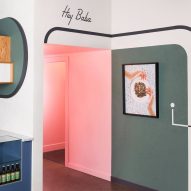 Upon entering, guests are met with a curving quartz counter that arcs away from the entryway.

The counter is used to display dishes in a way that aims to reflect the abundant spreads of food at the owner’s dinner parties which inspired the design.

The wall behind the counter is covered in fish scale cement tiles. Pendant-style lights from Kelly Wearstler’s Tableau collection hang from the ceiling above.

Beyond this, patterned finishes that the studio felt reflect Lebanese art, architecture and foliage become visible.

“We started with some source imagery of Middle Eastern themes, and we knew we did not want to imitate or create a pastiche, but we wanted to reference it with a lighter touch – it came in the rounded corners, the arches, the colours, and the patterns,” said Tang.

A teal and cream tile floor by French architect India Mahdavi lines the long interior, stretching through a series of arches that organise the space.

Next to the storefront window, seating booths are formed by two recessed arches painted with purple accents whilst additional arches on either side of the counter contain shelving.

The booths are covered in a floral pattern by Hella Jongerius, while a patterned wallpaper coats the ceiling in the back of the restaurant.

As Nabila’s welcomes guests, the studio envisions this back section with warm light, rich colours will host many lively neighbourhood meals.

Other Lebanese restaurants featured on Dezeen include Studio Roslyn’s restaurant based on bad food photography in Victoria, Canada and a Lebanese snack bar by architect David Dworkind featuring an array of ash-wood furniture.

The photography is by Gieves Anderson.