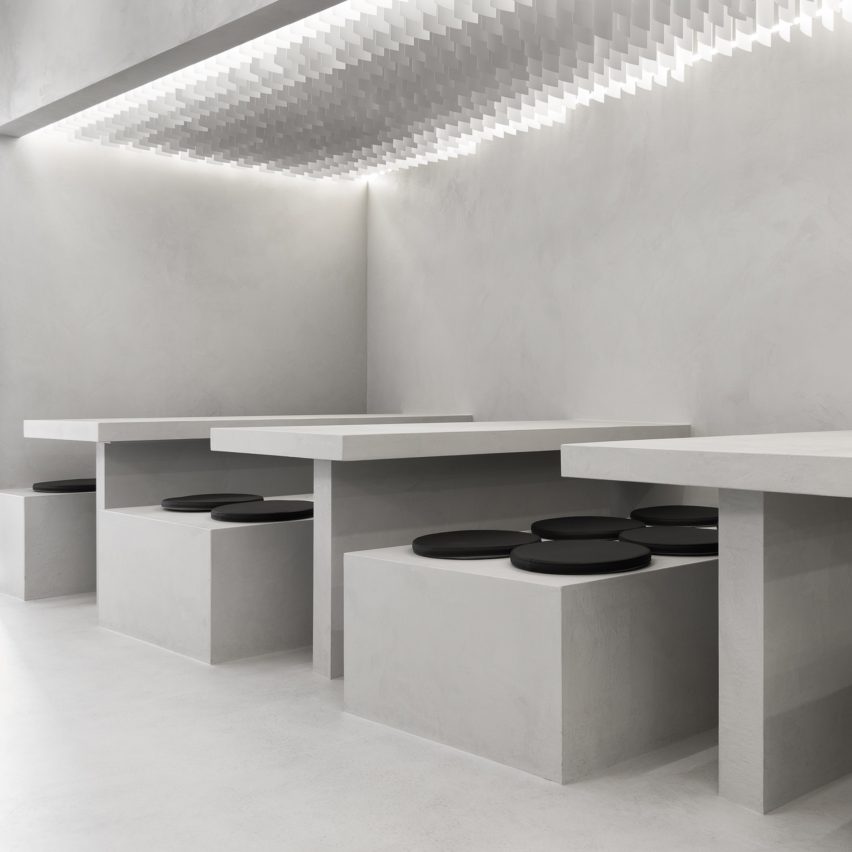 Canadian firm StudioAC combined micro cement, stainless steel and vinyl to form the interiors of a Chinese restaurant in Ontario designed to “respond to the context of the strip mall” in which it is located.

Called Bao, the restaurant is located in the city of Markham, Ontario. It is positioned between a convenience store and a pharmacy along a strip of suburban shops.

StudioAC‘s aim was to create an interior that would provide an efficient dining experience as well as easy takeaway and delivery access, while also promoting Bao’s distinctive visual style.

To do so, the studio arranged the interior around two angled tangent lines drawn from large street-facing windows to an open kitchen positioned at the back of the restaurant.

“These lines skew the visual perspective into the store to dramatise food preparation,” StudioAC told Dezeen.

While Bao’s interior design stands out from the traditional shops that flank it, the restaurant’s facade was kept deliberately simple to blend into its suburban environment.

“On the one hand, the project embraces the banal nature of the strip mall as we haven’t really done anything to the exterior,” explained the designers.

“But on the other hand, the project’s interior responds to the context of the strip mall by introducing a unique visual terminus along an otherwise mundane facade made up of repetitive box stores.” 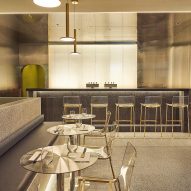 StudioAC chose to use a minimal palette of three materials throughout the monochrome interior design to let the restaurant’s statement layout speak for itself.

Rectilinear grey microcement tables, benches and stools are positioned on each side of the restaurant, while the open kitchen was finished in stainless steel that was chosen for its striking reflective design as well as its durability.

Above the seating, the team built chunky bulkheads that are positioned parallel to one another. Below these hang contrastingly delicate banners made from vinyl vertical blinds, which were designed in a nod to traditional Chinese lanterns.

Chosen as a material partly for their cost-effectiveness, the backlit blinds also aim to introduce “moments of softness and intimacy” to the otherwise harsh and muted interiors.

“We considered all of the furniture as part of the architecture,” explained the designers, who created the custom tables and seating for the project.

StudioAC has completed numerous other interior designs that are led by a minimalist approach. These include a Toronto house with a pair of timber-clad bedrooms and a luxury cannabis dispensery with faceted walls.

The photography is by Jeremie Warshafsky Photography.