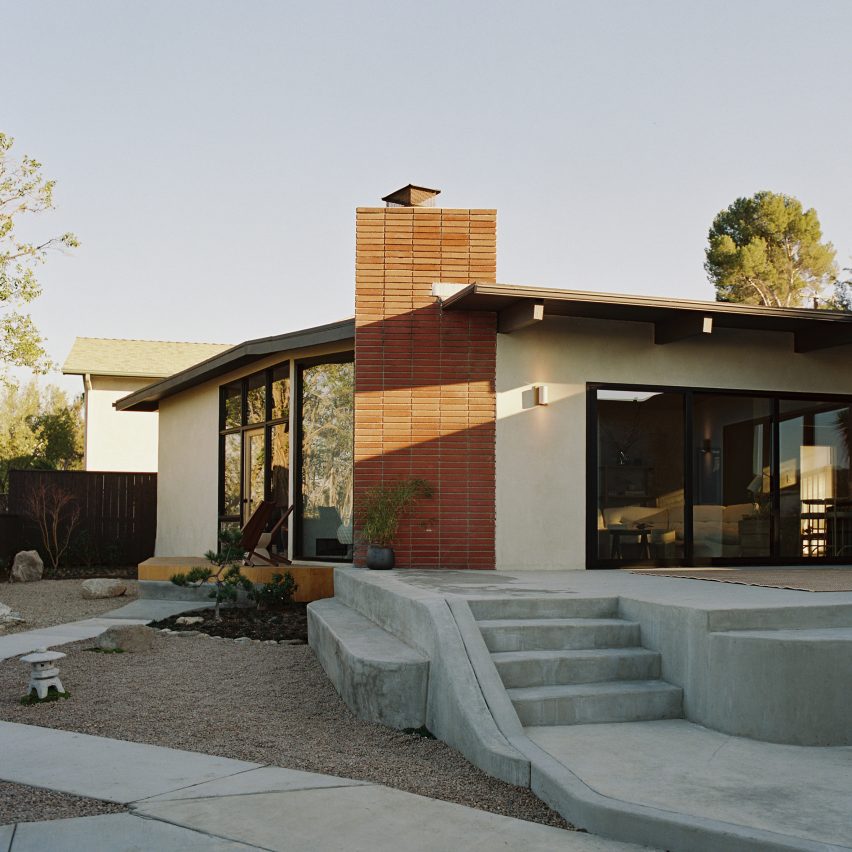 California studio OWIU has revamped the interior of a 1950s home, adding elements that were inspired by traditional Japanese inns to create a peaceful environment.

The single-storey residence was bought as an investment property by actor Kane Lim and was sold last month following a renovation by local studio OWIU, which stands for The Only Way Is Up.

Originally built in 1955, the dwelling looks toward the city skyline in the distance.

“We were drawn to the home’s seclusion from the hustle and bustle of Los Angeles,” said Joel Wong, who leads OWIU with Amanda Gunawan.

When the designers embarked on the mid-century renovation project, the house was in rough shape, with soiled carpets, degraded flooring and broken windows, among other issues.

The designers aimed to transform the neglected home into “a refuge of calm” by drawing upon the landscape and using neutral elements that would help quiet the mind.

“If you go in strong with design, it energizes you quickly and then promptly dies out,” said Gunawan.

“Much of our design leans toward the ryokan, a traditional Japanese inn, enabling us to achieve a visceral effect,” she added.

On the exterior, the designers applied smooth, tan stucco. To create a more open atmosphere within, they removed several non-load-bearing walls and false ceilings and reconfigured part of the layout to create a main bedroom suite.

Earthy colours like terracotta and beige – and materials such as light-toned oak flooring – give the home an organic feel.

In certain rooms, walls are clad in Venetian plaster. The designers said that this material “brings the delicate texture of the surrounding mountains into the home”.

Original wooden beams and panels were sanded down, revealing the natural colour.

In the kitchen, one finds quartzite countertops and oak cabinets, along with an island made of glass blocks. The same material was used for a partition separating the living area from a bathroom, creating privacy without obstructing flow.

The designers noted that the glass bricks – which are structurally strong while still enabling the passage of light – are often associated with “a period of garish flash from the ’80s”.

“OWIU sought to restore the material to its original glamour and refigure what might otherwise be considered obsolete,” the team said.

To furnish the house, the designers worked with the vintage collector Jullie Nguyen of LA’s Ban Ban Studio.

Notable pieces include a modular sofa by Vladimir Kagan and a 1980s Hexa coffee table by Bernard Vuarnesson, both of which date to the 1980s. 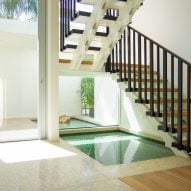 “These pieces brought a distinctly modern-yet-practical touch to the home while remaining in harmony with the existing architecture and new design elements,” the team said.

Beyond the interior, the studio reimagined the backyard by creating a sculptural, poured-concrete terrace and a custom bench around a fire pit.

Moreover, the studio added a small wooden deck off the main bedroom that is meant to evoke a platform in a Zen garden. It also takes cues from tea ceremony rooms found in ryokans.

“The step down leads, almost imperceptibly, into the garden, easing the home dweller into the natural space,” the designers said, noting that the yard features bonsai and maple trees.

“The action is so unassuming that one might forget this step after the routine of living, but this is precisely the goal: a ritualized transition into calming spaces.”

Other projects by OWIU include a renovated apartment in an old factory in downtown LA, which features Japanese design elements that encourage “a mindful lifestyle”.

The photography is by Justin Chung.

Creating a Healthier World for Our Pets – Dogster