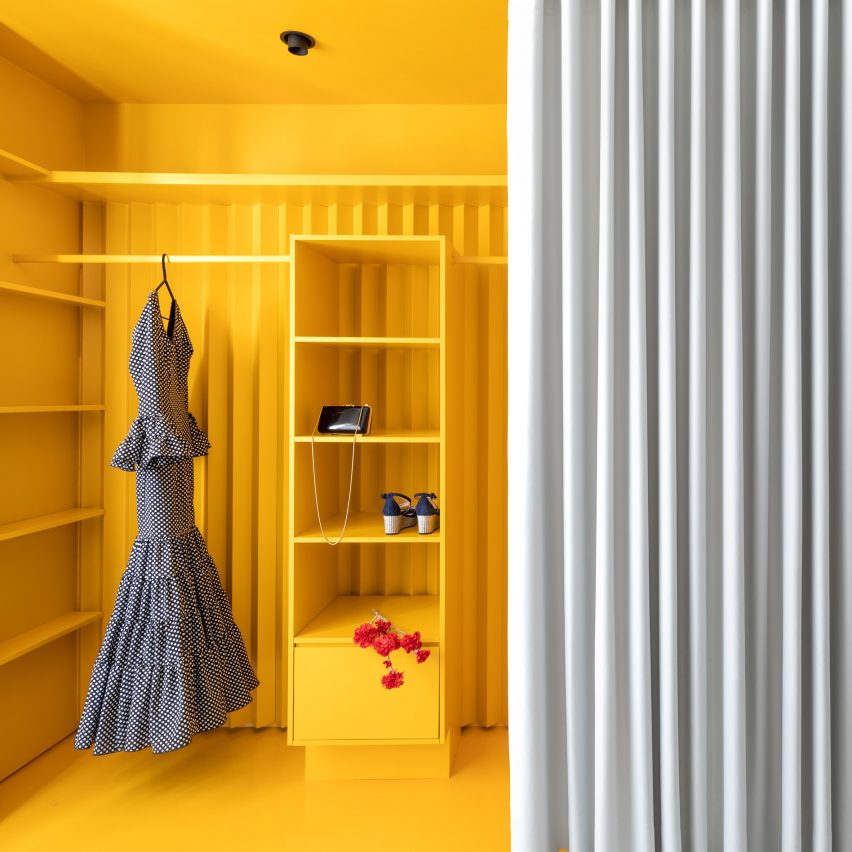 A pop-up guest bedroom features in this open-plan apartment by Studio Noju, which was renovated to create the illusion of having separate spaces and dressed in colours that nod to its Seville location.

Casa Triana is a 60-square-metre apartment renovation in the Triana neighbourhood of Seville, southern Spain.

It is the debut collaborative project by architects Antonio Mora and Eduardo Tazón, who co-founded their firm Studio Noju – a shortening of “not just”.

Spread across an open-plan area, the apartment features a bedroom for a single occupant, as well as a separate living space with living and dining areas and a kitchen. A bathroom is also included in the dwelling.

“Our main strategy was to create the illusion of having several independent spaces within the open floor plan,” Mora and Tazón told Dezeen.

In line with this objective, an additional pop-up bedroom for guests can be created in the living space thanks to a retractable blue curtain, which is either stowed away or deployed to make a rippled partition.

The main bedroom also includes a walk-in wardrobe that is separated from the rest of the space in the same way.

Each area of Casa Triana is distinguished by its own jagged colourful alcove made from readily available and low-cost roof ridges, known as “cumbreras” in Spanish.

The ridges are typically used to cap gabled roofs in traditional construction projects. Studio Noju placed the horizontal V-shaped ridges next to each other vertically to delineate these distinctive spaces.

“We created the alcoves with the idea of ‘architectural texture’, which gives them a distinctive three-dimensional backdrop, creating an interesting play of light and shadows while giving depth to the space,” said Mora and Tazón.

The alcoves’ colours create a lively contrast with each other, such as the cool lime green kitchen unit and the adjacent dining space dressed in a peaceful orange hue.

“Triana is charged with a myriad of colour references that are distinctly part of the architectural heritage,” explained the architects.

“The apartment’s design references some of these swatches, which are unmistakably Sevillian colours, such as the ‘albero’ yellow, a type of sand that covers some of the city’s streets and parks.”

Retroscena is a colourful apartment renovation by La Macchina Studio

Casa Triana features a mix of bespoke furniture by Studio Noju and pieces sourced from a range of other interior designers.

A pale grey Delaktig Sofa by Tom Dixon for IKEA was placed in the living space, as well as a matt-lacquered wooden bar cabinet and gradient rug, both custom-made by Studio Noju.

While Mora and Tazón explained that Casa Triana’s design intends to avoid feeling like a “characterless loft,” they emphasised the importance of making the most of available space in a one-bedroom apartment.

“Increasing real estate prices are making it very difficult for young people to access the property market, who are mostly bound to smaller apartments, such as this one,” the studio said.

“From a design perspective, there is a need to answer to this reality, and in this case, we wanted to create the feeling of a more spacious home for the owner.”

Studio Noju was founded in 2020, although Mora and Tazón began collaborating on Casa Triana in 2019.

Other small apartments with creative interior designs include a home in Athens within a semi-basement storage space by Point Supreme and a New York apartment by Martin Hopp with a retractable dining table.

The photography is by Studio Noju.

What Does Exfoliating Do For Your Skin?