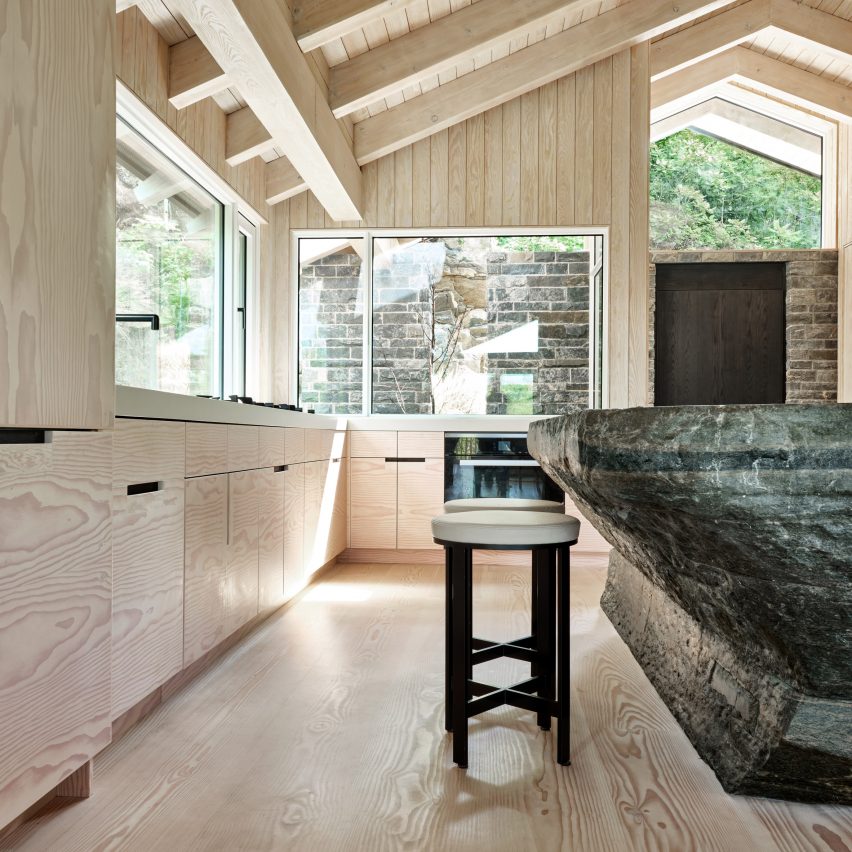 Exposed finishes that draw cues from the forests and geology of Canada come together in this remote holiday home by Toronto-based architect Studio Paolo Ferrari.

Named after the Muskoka region where the project is located, the retreat overlooks Lake Rosseau, an area that is known as one of Canada’s most sought-after vacation destinations.

The area sits roughly two hours north of Toronto, and is known for its natural setting. It inspired a collective of painters, known as the Group of Seven, who produced some of the most iconic Canadian imagery of the early 20th century.

“We wanted to create a place of respite from the intensity of city life and also to build as sensitively as we could, complementing, but never overwhelming, the surrounding environment,” said Studio Paolo Ferrari.

Two primary materials were used for the two-storey building: granite, which forms many of the islands in the area, and Douglas fir, which the architects used in the exposed roofs found throughout the home, as well as in cabinetry and on certain walls.

“The granite is coarse-grained and hard,” said the studio. “It references the minerality of the site and imbues the interiors with a sense of ruggedness.”

“The Douglas fir offers tactility and warmth, and it connects the house with vernacular building traditions,” the studio added, noting that some of the materials used came from the site itself.

Studio Paolo Ferrari designed an inverted layout for the two-bedroom home, placing the communal areas on the upper floor to give them the best views of Lake Rosseau.

The open-concept kitchen, living, and dining room is anchored by a granite kitchen counter that appears to be made of a rough block of stone. Its edges cantilever out, creating a place to sit for a casual meal.

“The kitchen island – a large, unfinished block of granite – evokes the boulders and outcroppings one sees across the Canadian Shield, an expanse of bedrock that extends from the Great Lakes to the Arctic Coast,” said Studio Paolo Ferrari.

“With its size and monumentality, the island offsets the expertly crafted cabinetry that surrounds it.”

The living room is fronted by tall, sliding glass doors that open onto a terrace that offers sweeping views of the lake below.

Most of the surfaces are covered in a light-coloured wood, which helps the space feel airy and bright. 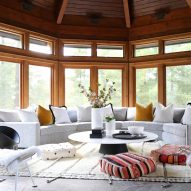 The bedrooms were located on the ground floor. The primary suite faces out onto the lake, while a guest bedroom is located at the back of the home. Its windows open out onto rocky outcroppings and thick trees, lending the space a sense of privacy.

“Windows frame views in all directions, not only outward to the lake but also inward to the granite escarpment, which is every bit as exquisite as the dappled water,” added the studio.

The home’s bathrooms were finished in dark granite, creating a sense of contrast from the bright open spaces in the bedrooms and communal areas.

Throughout the home, the furnishings were kept as simple as possible.

“Our guiding ethos was warm minimalism,” Studio Paolo Ferrari explained. “The interiors derive their elegance from a lack of visual clutter.”

Other natural retreats in Canada include a dramatic, cantilevered structure overlooking a lake, and a ski cottage that appears to have been split in two, by Montreal-based firm Naturehumaine.

The photography is by Joel Esposito.

The Skin Rocks App Has Landed

Get listed in Dezeen's digital guide for London Design Festival 2022