The Circus Canteen restaurant interior is “collage of unwanted items”

Local studio Multitude of Sins has created an eclectic restaurant interior in Bangalore out of a mishmash of reclaimed materials, including discarded bicycle bells and cassette tape boxes.

Officially called Big Top but known as The Circus Canteen, the restaurant is shortlisted in the sustainable interior category for a 2022 Dezeen Award.

Multitude of Sins sourced the components that make up the interior from a city-wide waste donation drive held over several weeks.

The materials were then painstakingly curated into distinct categories, ranging from home appliances to toy cars, and used to design an eclectic interior featuring mismatched furniture and flooring.

Less than 10 per cent of the materials used to create the interior were sourced as new, according to the studio.

“The Circus Canteen [was informed by] the concept of creating a collage of unwanted items with a curatorial spirit,” Multitude of Sins founder Smita Thomas told Dezeen.

Visitors enter the restaurant through a bold scarlet door decorated with unwanted bicycle bells and humourous hand horns, which is accessed via a series of labyrinthine archways made from teal-hued scrap metal.

The archways are illuminated by alternative chandeliers composed of dismantled bicycle chains and old vehicle headlights.

Inside, the two-level dining area is made up of custom tables and seating that double as a set of striking installations.

Salvaged objects used to create these booths include abandoned sofas, obsolete bathroom ventilators and colourful coffee tables created from old oil barrels sliced in half and topped with glass surfaces. 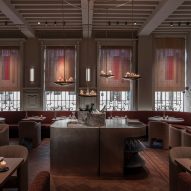 “One man’s trash is another man’s treasure,” acknowledged Thomas. “We have seen and felt this phrase come to life as we pieced together The Circus Canteen.”

The restaurant’s flooring is a jigsaw puzzle-style mosaic of sample tiles sourced from ceramics stores, while a kitchen serving hatch is framed by a colourful collection of outdated cassette tape boxes.

Prompted by the desire to create an eatery interior with a minimal carbon footprint, Multitude of Sins’ project responds to many designers’ growing concerns about the wastefulness of their industry.

“The creation of each element – from custom lighting and flooring to art installations and furniture – was attributed to the mercy of the waste donation drive,” said Thomas.

“It reminds us of adapting skillfully, to reinvent with agility.”

The Circus Canteen is part of Bangalore Creative Circus – a project formed by artists, scientists and other “changemakers” who host various community-focussed events in the Indian city.

Other eateries that feature reclaimed materials include a restaurant in Spain with elements made from upcycled junk and site construction waste and a cafe in Slovenia defined by recycled components that create a mix of patterns and textures.

The photography is by Ishita Sitwala.

Skin Care Ingredients You Should Not Mix