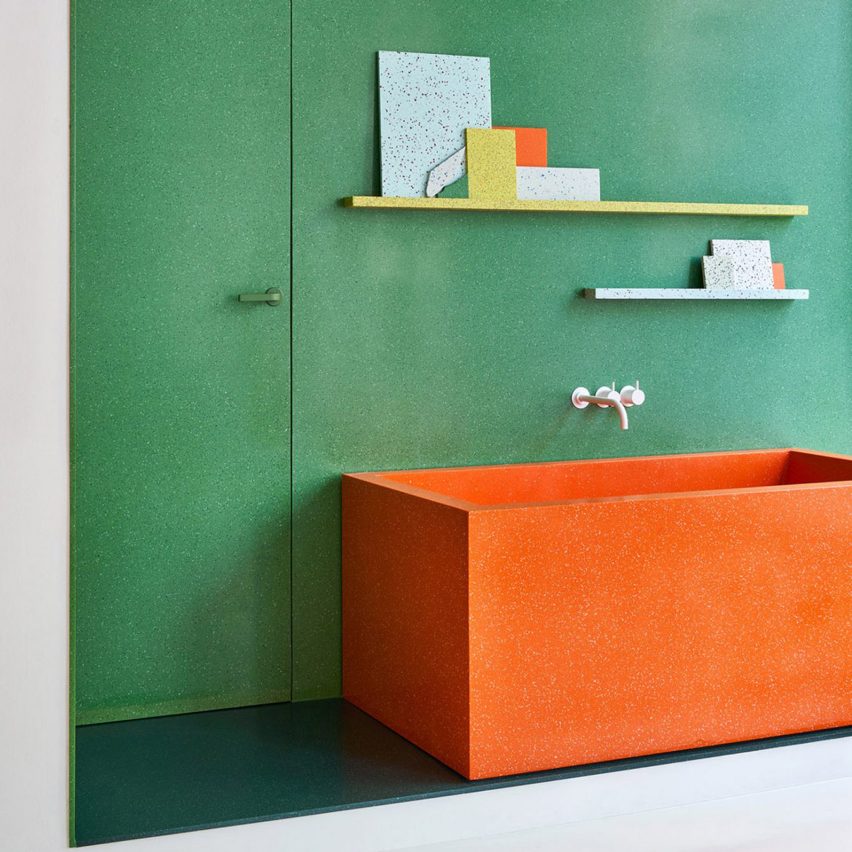 Finnish interior designer Linda Bergroth has brought together unexpected colour combinations for the Durat showroom in Helsinki, which is filled with the manufacturer’s terrazzo-like surface material made from plastic waste.

The showroom occupies around 100 square metres of space in central Helsinki on the site of a former coffee shop.

Durat‘s speckled surface material can be used in sheets or moulded into basically any shape, so the company wanted a showroom that would convey a sense of endless possibilities.

To this end, Bergroth made almost everything in the store out of Durat surfacing, including three display areas, a wall of colourful samples and a central kitchen-style island.

The display areas were designed to show off the material’s different thicknesses, joints and mounts while using a broad selection from the brand’s range of more than 1,000 colours.

One display features different washbasins, either integrated into a countertop or mounted on top. This area combines tones of turquoise, salmon pink and mustard with a white worktop that looks as if it was topped with a scattering of rainbow sprinkles.

“The showroom is mostly serving architects and designers,” Bergroth told Dezeen. “So it was easy for me to relate to the needs of the customer, who wants to understand the anatomy and possibilities of the material.”

“Many of the decisions were made to communicate these possibilities and not define how someone’s compositions should look,” she continued. “Untypical colour combinations and mismatched patterns are also a way of freeing the user to find new ways of thinking.”

Bergroth finished the showroom with minimal furnishings and fittings, including matt white Vola faucets she describes as resembling “immaterial cut-outs in the heavily patterned surfaces”. 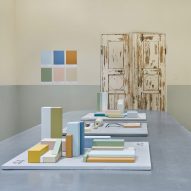 There is also a storage room and a private office area, both concealed behind doors that blend into the display areas.

The shopfront features big windows in two directions, which Bergroth and Durat used to their advantage by creating a design that could be experienced from the street as much as from the inside.

“The layout is designed in a way so it can be well explored from the street, also outside office hours,” said Bergroth. “This brings a nice brand visibility and brightens up the neighbourhood during the dark months.”

Durat surfacing is made from 30 per cent post-industrial plastics and is fully recyclable. The company aims to create a closed-loop material cycle where all Durat surfaces are repurchased at the end of their life and turned into new products.

Bergroth also worked with the material in some of her previous projects, including the pop-up Zero Waste Bistro she designed for the WantedDesign Manhattan fair.

Other projects by the interior designer include another Helsinki shop interior for the brand Cover Story, which makes plastic-free paint.

Ten homes that use colour to turn stairs into statements